Alright, so The Coolness, Kid and I leave the wondrous pizza place for the Hotel. We walked a different route than the one we'd taken to Old Town Pizza, and came across some ironic food-stall placement.

I had to get a photo, and left The Coolness and kid to get the following shot: 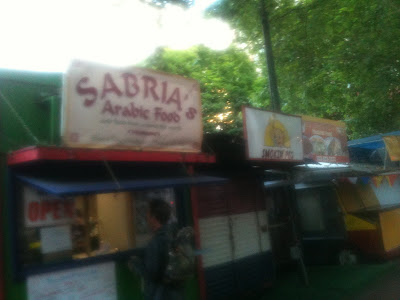 Yes, the further stall is "Smokin' Pig" while the nearer serves 'Arabic Food'. I could taste the irony.

As I walked to the crosswalk, a dark-haired woman stuck her head out the window of her silver SUV and called to me, "Do you work for the San Francisco Police Department Traffic Court?"

"You are, aren't you. We both," she gestured at her male passenger, "got completely bogus tickets there."

"That's odd," I answered, trying for nonchalant. I was five hundred miles from where I work, in civilian dress, unarmed and wondering where the fuck this was going to go.

"Completely bogus," she repeated as the light changed and she turned onto the road in front of me. I heard her and her passengers braying laughter as they drove off. I waited a full minute before returning to my family.

Now I know many of you will think that I am missing the point; that this was one of those serendipitous moments, an odd happening that should cause wonder, not seem ominous.

I do feel that sense of wonder.

The thing is, I didn't even issue either of the asshats tickets. I just told them, as a part of a large group, to keep their mouths shut and turn off cell phones.

They didn't stand out for me, though I vaguely remember a pair of people being found guilty, one after the other, for some infraction I don't recall (I do think they made the same argument and expected different results, if my very vague recollection serves.).

Now, some of you will know that I have arrested and enjoyed arresting more than a few murderers and other violent criminals. Many will, as a result of their sentences, see the light of day again.

This evening's events send a chill down my back, given that if this woman and her partner-in-infractions was motivated enough to recognize me in completely different circumstances, at least a month in the past and many hundreds of miles from the events that led her into contact with me, what does that say of a murderer or hardened criminal? Surely such people will be more motivated and have an actual reason to look for me, not to mention have more opportunity to study my face and mannerisms as I testify in their cases.

Such people are accustomed to doing harm to others, to attacking those that denied them something. Such people have a long time to think about what wrongs they feel have been done them, and by whom.

And if I am with my family when one has an opportunity, what then?

The woman had about fifteen seconds. That's a long, long time for someone with the ability and desire to wreak a little mayhem.

Fuck me what an oddly horrible thought to entertain on what was an otherwise great day.
Posted by Griffin at 10:49 PM