It's Been A While (Updatery MK III)

Tomorrow, 11/29/2017, I have an author event of Facebook, where I am the 'featured author' for Chuck Gannon's anthology, Lost Signals. I aim to entertain, and talk about Crate 88, the short story I wrote for the anthology.

December 17th, the paperback edition of 1636: Mission To The Mughals, comes out.  Almost every SF book I had as a kid was in paperback, and much as I love the feel of a hardcover in hand, the arrival of the mass market paperback of my book is a source of true excitement for me.

My short story, Bank On It the first I ever submitted for publication, has been selected for the Ring Of Fire VIII anthology.

I have submitted another short, Alpha Gamers for yet another anthology, this one in John Ringo's Black Tide Rising Universe. Hopefully Alpha Gamers will see print in 2019 if not sooner.

So, for a writer of novels, it seems I am having some success with short stories...The irony flattens my ego, a bit, but it's good to be in print, so I am not complaining, not one bit!

Email ThisBlogThis!Share to TwitterShare to FacebookShare to Pinterest
Labels: 1636: Mission To the Mughals, 1636: The Mughal Mission, Chuck Gannon, Updates

A Kind and Generous Fellow

My friend Robert Buettner, whose new book, The Golden Gate, is out now, was interviewed on the Baen Podcast along with Toni Weisskopf. Robert gave me and the department I work for a very kind shout-out for the help we gave him in researching the book.

A bit of a departure from Robert's usual style, The Golden Gate is a near-future thriller that I found engrossing and original. The book is excellent, and I highly recommend it.

Eric Flint and I Did A Thing: 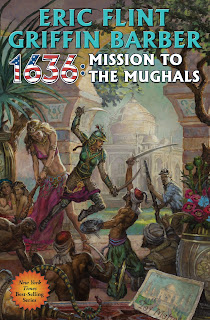 If you want to buy it, Amazon is accepting preorders here.

Posted by Griffin at 6:21 PM No comments:

I managed to get myself on some panels at LibertyCon this coming weekend. I am feeling a strong dose of imposter syndrome for it, as one of the panels I am to participate in is with Dave Drake and John Ringo, two of the biggest stars of my SF-reading universe. In fact, I have been a fan of Dave's work since I was fifteen, and John's fan for about 15 years...So yeah, big moment for me. I am doubly lucky in that I know both gentlemen, and get on well with them.

Chuck Gannon and my co-author Eric Flint will be there, as well as the rest of the 1632 crew, among them many other friends and fond acquaintances.

I will also get a chance to see my oldest friend, Kyle, whom I have not seen in about five years. He will also come out to see my parents outside Chattanooga, the first time he's seen them since we were 16 or so.

So, yeah, big week coming up for me. Hope I don't screw up.
Posted by Griffin at 8:10 PM No comments:

I am exhausted by the mess going on around the Hugo Awards.

I have always written because I felt I had to for my sanity. I have always loved writing SF because it's what I always enjoyed reading. Even on becoming a professional writer, writing was not stressful because I loved it--I loved the people with all their crazy ideas and creative solutions. I loved talking about it, fanning out about what was new and brilliant.

My day job is often stressful. Family life is very rewarding, but can have its added stresses. SF and its community was my hidey-hole, the place I could go to, pull the lid over my head, and forget about the shit, all the while sharing the joy, the glee (and yes, even the hiding-place) with others who loved SF.

These days, I find my feeds filled with a river of cess I would rather not have to wade through to express and explore my simple joy over the latest book, show, or comic with other like-minded folks.

I am not sure what to do about it, but I really do feel bereft of the place I used to go to for relief and I hope that folks get their act together and decide to treat one another better and with less disrespect.

The trolls have been fed, and the rest of us bled.

This weekend, something awesome happened.

But first, a few data points:

I have always worried I might be an asshole. Not just a garden variety, drives-like-a-shithead asshole, but a real one, one you wouldn't think twice about fucking with because: JUST LOOK AT HIM. BALD ASSHOLES ARE THE WORST!

This is a hard one to overcome. I think it's part of my make-up, part of who I am, that I worry people think I'm an asshole. I know I can be one. I even realize we can all be one, given the proper circumstances.

Of late, my day job reinforces that internal, abusive little voice,  as there is little love out there for those that wear a uniform. When both sides of the political spectrum hate your profession, things are unpleasant. This aspect of my worry is a bit easier to deal with, as I take the uniform off and most people are left with just plain BALD ASSHOLE to look at.

Then there is the daunting insecurity I am told most writers feel, that sensation of: I'M A TALENTLESS HACK! UNWORTHY OF NOTICE, NO ONE LOVES ME! BALD ASSHOLE!

I fought this-still fight it- by simply acknowledging how much better I feel when I'm writing than not. T o my mind, writing is a weird thing. It's done in relative solitude, for the most part, but its end product is ultimately for others to consume (or not). Along the way to that consumption, it's likely the writer will have to interact with people in the flesh, as it were...

So, there I was, BALD ASSHOLE, going to conventions and meeting people involved in the writing world, and worrying what they thought of me and, if they had the time and inclination, my writing. Now, I've lived in a few places, known a few different people from different walks of life...

Mind you, I was always worrying, even when I wasn't bald, that people saw me as a BALD ASSHOLE, but because of this experience of life,  I wasn't all that fearful of putting myself out there. Having done it a few times makes it easier to brave the writing convention waters.

At the conventions I met hopefuls, I met stars, I met superstars, and I met some of my writing heroes. Along the way, I even made new friends that seem to have overlooked my BALD ASSHOLISHNESS.

In this modern era, we can easily reconnect with old schoolmates, old friends, and even integrate distant new friends and acquaintances with our current lives. It is a blessing that BALD ASSHOLE doesn't think he deserves, but there it is.

"BUT, YOU'RE A BALD ASSHOLE, WHO WOULD WANT TO?!" my inner ego-piercing voice seethes.

Don't mind that little bastard, at least not today.

This, in a roundabout way, leads me back down the rabbit hole to my big announcement: Today I announced on Facebook that Eric Flint and I had sold our novel, 1636: Mission to the Mughals.

I had a torrent of good wishes from people I have come to know throughout the various stages of my life. Some were even moved to comment with well-wishes, and not just my blood relatives.

What a joy that silence was.

I shall continue to seek it, and be worthy of my friends and family.

Somewhat bewildered and unsure of what I was doing there, I was sitting in the lobby area/bar when a fellow with outrageously long locks and a beard sat beside me at another small table. A steady stream of friends and fellow writers approaching him, engaging in funny, friendly banter. He took a moment during the fun to meet and subsequently include the balding, bewildered fellow seated near him in his conversations.

That fellow was me.

My time with Jay on that occasion did not last very long, but it was very, very informative to my experience of World Fantasy. As anybody who knows me can tell you: I love World Fantasy Convention. Part of that love had its genesis in Jay's inclusion and initiation of me into this world of writers and their society.

I didn't get the chance to speak directly to Jay very often on the subsequent occasions we saw one another, just exchanging a friendly nod and kind word in passing. He always remembered my name, despite our limited experience of one another, and even when he was complaining about the devastating effects chemotherapy was having on his prodigious mind.

I read his blog, keeping up with his thoughts in that manner.

Two years ago yesterday,  I was in the process of making my first fiction sale.  I sent Jay a private message on Facebook:

announce like crazy, tell all your friends, buy your IRL friends a round

and congratulations, yes?
Excellent ideas, all! I shall see you at chicon! And thanks for the congrats. Contract not signed yet, so I'm no quite able to shriek it from the rooftops, bit it's there!


I took all your advice, Jay.

Good luck and safe journey on your travels, wherever they may take your essence.
Posted by Griffin at 10:18 AM No comments: